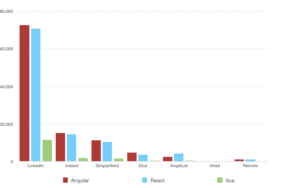 ReactJS is an open-source JavaScript library introduced by Facebook to build dynamic user interfaces. It is based on JavaScript and JSX (a PHP extension) and is considered widely for developing reusable HTML elements for front-end development.

Angular is an open-source front-end development framework powered by Google. It is a part of MEAN stack and is compatible with a large number of code editors and is considered for creating dynamic websites and web apps.

Its most recent stable version is Angular 7, while Google still supports the first version, i.e., AngularJS. 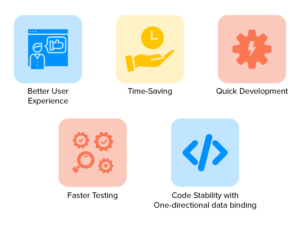 Unlike other JavaScript frameworks, React uses the Virtual DOM – the abstract form of Real DOM. This makes it easier for the React app developers to update changes performed by the users in the application without affecting the other parts of the interface

In the case of React, the app development companies can reuse the code components at distinct levels at any point of time. Besides, the components are isolated to each other and changes in one does not affect the other, which makes it easier to manage the updates.

React allows the developers to reuse the existing code and apply hot reloading into the process. This approach not only improves the app performance but also accelerates the development speed.

React extensively uses Redux which cut down the hassle of storing and managing component states in large-sized and complex applications with enormous dynamic elements. It helps the developers to add application state in a single object and empower every component of the app to access the application state without involving child components or using callback.

ReactJS let the developers work directly with the components and employ downward data binding to ensure that the parent entities do not get affected by the changes of child entities.

Angular uses TypeScript programming language, which is a superset of JavaScript. It compiles JavaScript, but also ease the process of finding and eliminating the common issues while typing the code.

Angular has a hierarchical dependency injection, much better than that of AngularJS, in which classes are not dependent on each other. They rather turn towards the external sources, which delivers higher performance to the Angular mobile applications.

The latest version of Angular, i.e. Angular 7 also offers features like an upgraded error handling process for @Output in the scenarios where a property is not initialized.

Angular CLI (Command Line Interface) is easy to install and use, newcomer-friendly, offers innovative testing tools and simpler commands and is supported by various engineers and platforms, which make it possible to update even those components having a third-party dependency. 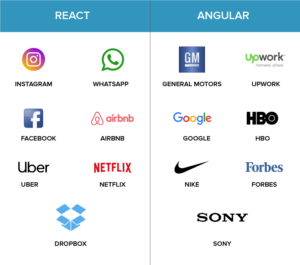 When to Use React for Developing an App?

React is the right fit for your app project when:-

When to Consider Angular for App Development?

Going with the Angular framework in a good choice when:-

Hi. I am Aprajita Agrawal. I am from Madhya Pradesh and I have completed my graduation (BBA)

it was really very nice blog with easy language