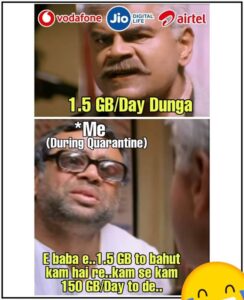 What Is a Meme?
You might be surprised to know that the word meme didn’t originate online. In fact, author Richard Dawkins first used the word in his 1976 work The Selfish Gene. The book looked at evolution and used meme to describe an idea or behavior that spreads across people in a culture.

When someone says meme nowadays, they’re probably referring to an internet meme. This is the common usage we’ll discuss here and builds on Dawkins’s use of the term.

For a basic meme definition, we’ll use the following:

A piece of media, often humorous, that spreads rapidly through the internet.

Advertisement
Often, memes go through small alterations like the game of telephone. Sometimes, memes even beget new memes. What’s fascinating is that the nature of online memes means we can trace their origins, evolution, and changes in popularity.

Now that we have a simple meme definition, we’ll look at some meme examples to help you better understand how memes originate and spread.

Meme vs. Image Macro
Before we continue, we should address a common wording mistake. Many people use the word meme to refer to any image that has text overlaid on it.

For example, here’s a random image of a guy using a computer with some text I added:

The proper term for this is an image macro; this is not a meme. Why not? Because this hasn’t spread across the internet. It’s just a silly image I made. If you posted this on Reddit, nobody would recognize the format.

Some image macros are memes, but not all memes are image macros (as we’ll discuss below). And someone creating an image macro and sharing it doesn’t make it a meme.

Historical Meme Examples
Let’s walk through some famous memes from years past.

This classic meme plays on the internet’s love of cats. Its format is simple: one or more cats, usually in some adorable situation, with overlaid text. The wording is intentionally poor English that now has its own name: lolspeak.

Advertisement
In this case, Condescending Wonka is exactly as it sounds. It’s an image of Gene Wilder as Willy Wonka, taken from the 1971 movie Willy Wonka & the Chocolate Factory. The meme features patronizing statements from Wonka.

Gangnam Style is one of the internet’s best-known viral videos. It released in July 2012 and quickly spread like wildfire, racking up more than nine million views per day for two months during the height of its popularity. Everyone from mainstream news outlets to celebrities was talking about it before long.

Thousands of people created reaction videos, parodies, and more. It was the first YouTube video to hit both one billion and two billion views. In fact, it had so many views that it surpassed the memory YouTube had for its view counter at the time. And it’s still one of YouTube’s most-watched videos.

The 15 Most Viewed YouTube Videos Ever
The most viewed YouTube video has over five billion views. Which of these most liked and watched YouTube videos have you seen?
Read More
Gangnam Style is an unforgettable phenomenon that perfectly illustrates how quickly something can spread through the internet.

Chuck Norris has been a martial artist, actor, film director, and more in his life. But online, he’s not primarily known for any of that. Instead, he’s become famous for “Chuck Norris Facts,” a meme that chronicles absurd feats of Norris.

These facts exaggerate his toughness, claiming impossibilities such as his ability to win a game of Connect Four in three moves. Norris has stated that he finds the facts funny, and has no doubt enjoyed renewed fame from the meme.

This is a quote from the 1997 space shooter game Star Fox 64 that has enjoyed a long life on the internet. In the game, your wingmate Peppy advises you to do a barrel roll to avoid enemy fire.

Due to the game’s cheesy voice acting, this became an oft-repeated phrase online. It’s just one of many gaming memes that made it into the mainstream. In fact, try searching for do a barrel roll on Google and see what happens.

This endlessly customizable meme became popular on Twitter. In it, you state that you plan to tell your kids about a famous person or group of people. However, instead of a picture of the actual entity in question, the tweet contains a photo of a different person or group that shares some characteristics with it.

There’s a lot of potential here for comedic contrast. The idea that someone would tell their kids a blatant lie about pop culture icons because they wouldn’t know any better is definitely good for a few laughs.

One of the most popular memes of 2019 is a combination of two separate images. The left part shows a screencap of an upset woman from The Real Housewives of Beverly Hills, while the right shows a confused-looking cat sitting in front of a plate of vegetables.

As meme pair, both images usually receive a label. The general theme is that the woman is upset about something for which the cat feels indignant about or has no control over.

This simple meme is based on a shot from the cartoon SpongeBob SquarePants. The image shows SpongeBob getting out of a chair with a dismayed look on his face. Paired with its caption of “Ight Imma Head Out,” this meme lets you express your desire to leave a scenario.

If you want to get more creative with it, you can edit SpongeBob into different situations than his chair at home.

Our next meme is a good example of a phrase that starts out as an innocent question before being parodied into oblivion. It originated when a Twitter user posted a picture asking people which labeled seat on a New York City subway was the best.

Before long, people started asking which seat was best in ridiculous scenarios, such as on board a spacecraft or in Congress. But if you ever wondered, now you can spark a debate on seating in all sorts of situations.

This repeatable phrase meme evolved a bit over time. It started out as a caption you would place on seemingly random pictures of people involved in a strange activity.

Over time, the next popular rendition combined the phrase with a group of villains from the Spider-Man cartoon from the ’60s. The show is known for is unintentionally hilarious animation, so the meme combines the cheesy looks on the villains’ faces with captions about juvenile behavior.

Learn More About Memes
We’ve taken a tour of five classic and five modern memes, but this is only a tiny sampling. Memes are constantly emerging and dying off—what’s insanely popular today is stale next week.

Many memes originate from corners of the internet like 4chan and Reddit. Eventually, if they stay popular, they make their way to mainstream social networks. If you keep an eye out, you’ll eventually learn to identify the latest meme trends.

For an all-around reference on memes, we highly recommend checking out Know Your Meme. This encyclopedic site is dedicated to cataloging the origins, use, and examples of memes. It’s a great place to learn how a meme started or see what’s popular recently.

For more resources, have a look at websites to find new, trending, and weird memes, as well as the best generators to make your own memes.

Affiliate Disclosure: By buying the products we recommend, you help keep the site alive. Read m