Web development tools have come a long way in just a few short years. Thanks to this progress, we can harness the power of highly tested libraries to improve our workflow and benefit from greater possibilities when it comes to responsive design. Not only that, we can build things together thanks to ever-improving version control systems. From browser add-ons and plugins, to processors that streamline your code, there have never been more possibilities for creating awesome web applications.
1.Sublime Text
2.Chrome Developer Tools
3.jQuery
4.GitHub
5.Twitter Bootstrap
6.Angular.js 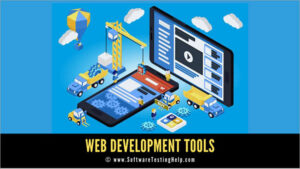 1. Sublime Text: A first-rate code editor – one that features a well-designed, super efficient, and ultra speedy user interface – such as the ability to perform simultaneous editing (making the same interactive changes to multiple selected areas) as well as quick navigation to files, symbols, and lines. And when you’re spending 8+ hours with your editor each day, those precious few seconds saved for each process really do add up…There are several that do this well, but arguably the best (and most popular) is Sublime Text.

2.Chrome Developer Tools: Chrome Developer Tools are Bundled and available in both Chrome and Safari, they allow developers access into the internals of their web application. On top of this, a palette of network tools can help optimize your loading flows, while a timeline gives you a deeper understanding of what the browser is doing at any given moment.

3.jQuery: That was until 2006, when jQuery – a fast, small, cross-platform JavaScript library aimed at simplifying the front-end process – appeared on the scene. By abstracting a lot of the functionality usually left for developers to solve on their own, jQuery allowed greater scope for creating animations, adding plug-ins, or even just navigating documents.

And it’s clearly successful – jQuery was by far the most popular JavaScript library in existence in 2015, with installation on 65% of the top 10 million highest-trafficked sites on the Web.

4.GitHub: The repository hosting service also boasts a rich open-source development community (making collaboration between teams as easy as pie), as well as providing several other components such as bug tracking, feature requests, task management, and wikis for every project.

5.Twitter Bootstrap:Getting tired of typing in that same styling for a container? How about that button that keeps cropping up? Once you start building front-end applications regularly, you’ll start to notice the same patterns emerging.

UI frameworks are an attempt to solve these problems by abstracting the common elements into reusable modules – meaning developers can scaffold the elements of new applications with speed.

The most widely used of these frameworks is Bootstrap, a comprehensive UI package developed by the team at Twitter. Complete with tools to normalize stylesheets, build modal objects, add JavaScript plugins, and a plethora of other features, Bootstrap can dramatically cut down on the amount of code (and time) needed to build your project

6.Angular.js: This is where AngularJS, an open-source web application framework, comes in. Developed by Google, AngularJS lets you extend your application’s HTML syntax, resulting in a more expressive, readable, and quick to develop environment that could otherwise not have been built with HTML alone.

7.Sass: an eight-year-old open-source project which pretty much defined the genre of modern CSS preprocessors. Although a little tricky to get to grips with initially, Sass’s combination of variables, nesting, and mixins will render simple CSS when compiled, meaning your stylesheets will be more readable and (most importantly) DRY.