What is a hashtags ?

But if you’re sticking with #ThrowbackThursday posts on Twitter, unsure of how else to use hashtags, stay right here. Your brand can do a lot more.

This post breaks down the basics of effectively using hashtags on social media and why you should use them.

What is a hashtag?

The pound symbol on your keyboard—also called an octothorpe— was initially used to mark numbers.

They were first used as hashtags in the summer of 2007 by Chris Messina. That’s when the web marketing specialist walked into Twitter’s offices with an idea. Because of the platform’s brevity, he suggested the company start using the pound symbol to group related Tweets together.

This was the first-ever use of the hashtag:

Since then, the use of hashtags, their reach, and their effectiveness has only grown.

They’re not just for Twitter anymore, either. Hashtags are effective on other social media platforms too.

Increased engagement with your followers

Including hashtags in your posts means taking part in a conversation happening on that social media platform. And most importantly, it makes your posts visible in that conversation.

This can lead to greater engagement, boosting your brand’s social media engagement through likes, shares, comments, and new followers.

An opportunity to build your brand

Creating a branded hashtag can be an effective way to promote your business and drive conversation.

For example, the Raptors’ branded hashtag #WetheNorth lit up during the team’s winning 2019 season. It has universal appeal, and was one of the most-used hashtags by Canadians in the first half of 2019.

Using a hashtag that’s connected to an issue beyond your brand is a way to mobilize behind an important cause or issue.

For example, #EachforEqual and #IWD2020 were used across social media platforms, including LinkedIn, on International Women’s Day. 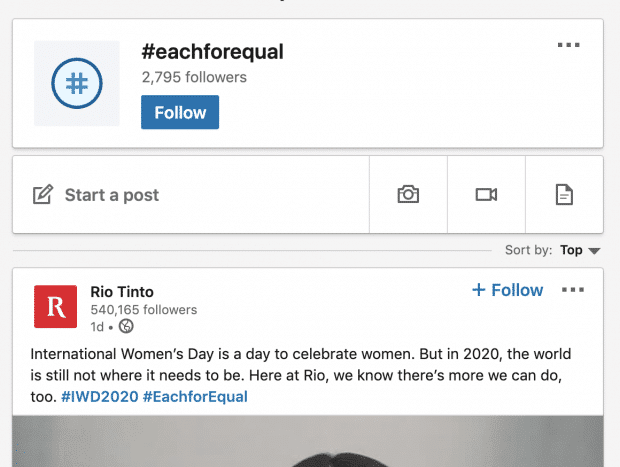 Brands can also create a branded hashtag that also shows its connection to a social issue.

On Twitter, you don’t have a ton of space to write a caption. You have 280 characters, to be exact.

Using a hashtag can be a simple way to contextualize what you’re talking about, without using up valuable characters or writing repetitive captions.

Help your target audience find you

On Instagram and LinkedIn, users can follow hashtags as well as other users. Using a few popular hashtags can be another way to help new users find your brand.

For example, if you use #travel on your Instagram posts, someone who follows that hashtag will see your recent post in their feed. You might gain some new followers this way.

The most popular hashtags

The most popular hashtags out there aren’t necessarily the best hashtags.

For example, the hashtag #followme has more than 515 million posts on Instagram. Hashtags that solicit likes don’t engage your followers and don’t add any meaning to your social media post.

They also look really spammy. And you don’t want that.

But don’t ignore popular hashtags, either. For example, #throwbackthursday or #flashbackfriday or other daily hashtags can be fun ways for your brand to join a wider social media conversation.

As of March 2020, some of the most popular Instagram hashtags of all time include: