What is Blockchain Technology?

We have often heard about a Central Server or computer or node connected to the internet and storing information online, but,

what if I say, a Decentralized system or setup connected to the internet and storing the information online.

And the Decentralized setup which I talked about above is what we call it BlockChain.

Blockchain, sometimes referred to as Distributed Ledger Technology (DLT), makes the history of any digital asset unalterable and transparent through the use of decentralization and cryptographic hashing.

A simple analogy for understanding blockchain technology is a Google Doc. When we create a document and share it with a group of people, the document is distributed instead of copied or transferred. This creates a decentralized distribution chain that gives everyone access to the document at the same time.

No one is locked out awaiting changes from another party, while all modifications to the doc are being recorded in real-time, making changes completely transparent.

Of course, blockchain is more complicated than a Google Doc, but the analogy is apt.

How does the Blockchain Ecosystem works? 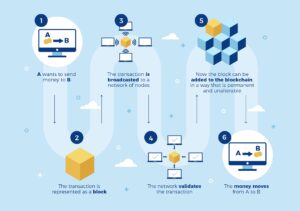 Blockchain Technology had a great introduction to the world when BITCOIN came into existence.

But, actually, Bitcoin was a kind of incentive paid to people who were helping to maintain the Blockchain Ecosystem in the form of currency.

Hope, you got some kick of what this BIG DADDY term BLOCKCHAIN means.

Content has a great pitch, helped me with basics too!!